The Journey through Pregnancy and Parenting

The Journey through Pregnancy and Parenting

Follow The Journey through Pregnancy and Parenting on WordPress.com

The whole Month leading up to his 1 year Birthday I was in shock. How did this year fly by so fast? I felt like I blinked and my baby was a year old. People always tell me that happens with their whole childhood and now I believe it. I had so much fun with him this past year, watching him learn new things and grow to the baby he is today. It’s so amazing to think that a WOMENS body can build this human being. Not only can we build a baby but we can feed him too. It’s just so fascinating to me. I am still nursing. Originally I wanted to nurse until 2.. but I think I’m done with it now. I love the snuggles and bonding and I’ll be very sad to stop nursing but I feel like we are all ready. I have attempted to start weaning a bit. I tried cutting down on night feedings and just rocking him but that was a no go. My baby wasn’t on board with that. At all. So I decided to cut day feedings first. I only really nurse him before naps unless he’s begging for it. I’m not sure how we will accomplish the night weaning. I think my boyfriend has to take over bedtime and night duty for a bit to stop the night nursing but I hate to ask him because he works full time. A few people told me that their baby weaned themselves at about 15 months so maybe I’ll give it more time and see if he weans himself. He isn’t only on boob milk, at 11 months we started coconut milk, almond milk, oat milk, and also the coconut and almond blend. He prefers almond milk. I really can’t get him to drink much though. We offer it at meals and he probably drinks 3-5 ounces a day. Good thing he’s a good eater.

He also started walking at 11 months. Which felt like forever since he took his first steps at 10 months but was very slow to progress. At first he was clumsy but then he got really good at it by his first birthday. Once walking started he started sleeping better. Nights were at least a 5 hour stretch, most were 6-7 hours straight, a couple nights even 8 hours! This felt like the whole night to me after not sleeping for a long ass time!

Funny story. So we temporarily live in the city, a college neighborhood to be exact (long story), but we have been looking for a house. We went to an open house with a huge backyard and put down our baby to walk around. We didn’t think twice. Well he didn’t move and started crying and generally looked terrified. It occurred to me that he’s never really been on grass! So we coaxed him to walk and he was getting the hang of it and then he fell forward and when his hand touched the ground it was like hot lava and he pulled it back so quickly and cried. It made me feel awful. This poor baby has been sheltered to city life and didn’t even know what grass was. Ughh. So a week later we went to eat and there was a grassy patch in the parking lot. We definitely put him on it to walk around lol. Since then I have been taking him to parks a few days a week and out in nature on trails to make him a bit more well rounded.

The night before his first Birthday I called my boyfriend at work and asked him, half jokingly, if he would take off the next day for our baby’s birthday so we could take him somewhere. Surprisingly he said yes and got the day off. We went to an aquarium then out to lunch. When we got home we did the famous 1 year birthday cake smash. Although he hated cake and barely touched it, it was a great first birthday for him.

The 12th month flew by! I feel like I just had his first birthday yesterday! At 12 months his graceful walk has turned into a clumsy run. He is getting bumps and bruises daily. Just yesterday he bit his lip mid fall and it bled a ton and is still swollen. Poor guy. He is also climbing on everything. He is a baby money. When he turns two I’m putting him in rock climbing lessons. 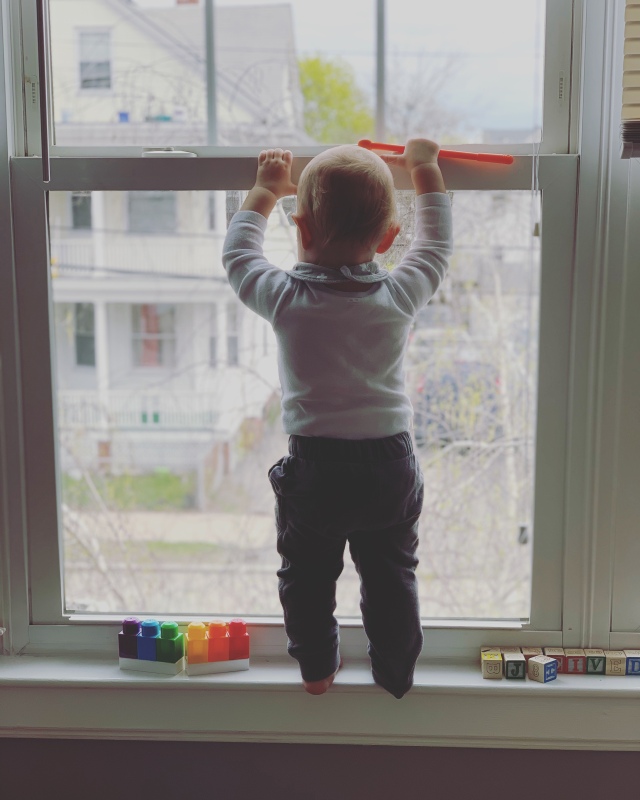 It’s not only him who is running, I started running too. Since I finally got cleared to cancel my surgery I decided to get back in shape. Which yes, I could have done awhile ago but I had the stubborn mind set of why bother, I’ll just be getting surgery anyways and I’ll have to start over again. But since I am definitely not having surgery I decided to get my ass in shape. I’ve been trying to eat better but because I’m still nursing I am a pig. Since day 1 if I don’t eat a lot I feel sick. I get dizzy and nauseous. I have to eat every 2 hours to feel normal. So since I can’t really diet I’ve been exercising. I worked out 15 out of 30 days last month which isn’t bad coming off pregnancy, bed rest, a caesarean and then pure laziness. I’ve also started running with the stroller. I use to run pre pregnancy but running with a stroller is a whole other type of run. It’s hard! I’ve finally got up to 3 miles in 30 minutes. Baby steps.

Baby has all 4 molars coming in starting at the 12 month mark. Two broke skin and two are close after. He has been miserable. Not eating much and his sleep has gone back to crappy. He still does a 4-5 hour stretch but no more long stretches and he’s ending up in bed with us a lot more. Poor guy.

He started making animal noises which is absolutely adorable. He hisses like a snake, howles like a owl, and makes monkey noises. He can also say bye bye, more, ball, daddy, and momma. He waves, claps, and high fives. He plays soccer and can kick a ball. He plays catch and can throw a ball. He dances a ton. He puts rings on the ring toy thingy, he can put all his shapes in the shape bucket toy thingy. He loves reading and reads to himself. He will also sit for a hour and let me read to him. He knows where his head, nose, eyes, ears, and feet are. He follows commands. He tries to unlock the door with keys. Opens and closes doors. And he nicely walks with me holding hands. He’s a great baby.

It’s amazing in just 13 months how much he has learned. I just love being a mom so much and watching this boy grow. It’s the best feeling in the world.